Engineering News Record has awarded three structures designed in collaboration by DeSimone Consulting Engineers as part of the 2019 New York Regional Best Projects competition. The annual awards program both celebrates and honors the New York/New Jersey region’s most impactful developments and the companies responsible for design and construction. Winning projects include ARO at 242 West 53rd Street, citizenM New York Bowery Hotel, and the new Statue of Liberty Museum which was awarded in two distinct categories

ARO is a new, luxury residential tower located in Manhattan’s Hell’s Kitchen neighborhood. The 62-story structure measures approximately 540,000 square feet and contains 426 residential units, 40,000sf of resort-class amenities, grade-level retail, and below-grade parking. The building’s silhouette increasingly curves as the structure rises and is formed by a combination of shifting floor plates and balconies that extend from north and west-facing sides of the building on the 3rd floor and on each floor from all cardinal directions in the top half of the tower from the 32nd to 59th floors. The tower stands 720 feet tall and only 75 feet wide for an slender aspect ratio of 9.5:1.

citizenM New York Bowery Hotel is the tallest modular hotel in the United States. Located in Lower East Side, Manhattan, the 21-story building contains approximately 100,000 square feet including 15 stories of modular hotel rooms. Each floor contains 20 hotel rooms that are constructed from 15 modules. Each module was transported to the site with the façade attached, the interior room finishes completed, and wrapped in waterproofing to the keep the rooms dry during construction. 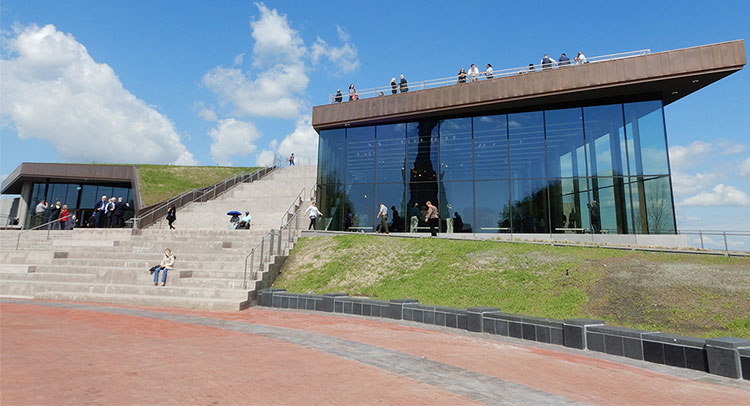 The new Statue of Liberty Museum comprises 26,000 square feet including 15,000 square feet of new exhibition space, a grand entry plaza, and a rooftop viewing deck. The structure was conceived as a garden pavilion that adds to the experience of all visitors to Liberty Island. To that effect, the museum’s roof acts as a lifted extension of the surrounding park and is planted with native meadow grasses to create a natural habitat for local and migrating birds. The structure, itself, is enclosed with bird-safe glass façade and locally sourced concrete to further minimize disruption of the local environment. Today, the project anticipates LEED Gold-certification.