The American Council of Engineering Companies of New York (ACEC NY) has awarded DeSimone Consulting Engineers two 2016 Engineering Excellence Awards in the Structural Systems category. The projects will receive the two highest honors, which are the Diamond Award for 170 Amsterdam and Platinum Award for Grove at Grand Bay.

170 Amsterdam is a 20-story, 236-unit residential rental building located on Amsterdam Ave. in New York City. The 236,000-square-foot building, which was developed by Equity Residential and architecturally designed by Handel Architects, utilizes exterior sloping concrete columns around the building’s perimeter to create a three-dimensional exoskeleton.

Grove at Grand Bay is located in Coconut Grove, FL, and features two towers that rotate up to 39 degrees, making them the first truly twisting towers in the United States. The towers rise 20 stories above a landscaped, two-story podium and are the first LEED Gold Certified residential buildings in Miami-Dade county. The 890,000-square-foot residential project was developed by Terra Group, with its architectural design provided by Bjarke Ingels Group (BIG) and Nichols Brosch Wurst Wolfe & Associates (NBWW). 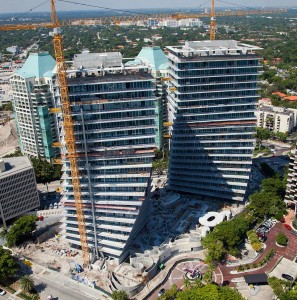 The Engineering Excellence Awards are presented to projects that encompass both the public and private sector. Each year, projects are judged on a rigorous set of criteria, which include complexity, innovation and value to society. These projects are judged by a panel of industry experts, and are assigned one of four levels (in ascending order): Silver, Gold, Platinum, and Diamond.

DeSimone will be honored at the 49th Annual Engineering Excellence Awards Gala, which will take place at the Waldorf Astoria in New York City on March 19, 2016.