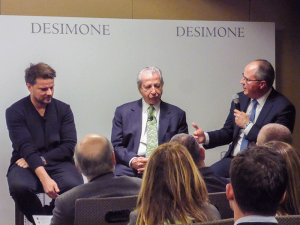 On Monday, Oct. 26 and Tuesday, Oct. 27, DeSimone Consulting Engineers hosted a series of presentations and discussions at the Council on Tall Buildings and Urban Habitat’s (CTBUH) 2015 International Conference at The Grand Hyatt in New York City.

Tuesday’s sessions kicked off with presentations from Rick Cook and Pam Campbell of COOKFOX, Dan Kaplan and Fatin Anlar of FXFOWLE, and John Britton and Steve Hargis of Woods Bagot. Next up was a discussion on Miami’s 1000 Museum Tower, moderated by DeSimone’s Chairman, Vincent DeSimone. On the panel were Chris Lepine of Zaha Hadid Architects, Luis Ramirez of DeSimone Consulting Engineers, and Louis Birdman, developer of 1000 Museum Tower. Mr. Lepine and Mr. Ramirez also presented as the project’s architect and structural engineer, respectively.

In addition to hosting the two-day series, Stephen DeSimone participated in a panel discussion on tall and slender buildings in New York City as part of CTBUH’s main conference.

DeSimone Consulting Engineers would like to thank its presenters and all those who attended its “Tall Building Structures” host room at the CTBUH 2015 International Conference.

You can view photos of the two-day event on our blog.