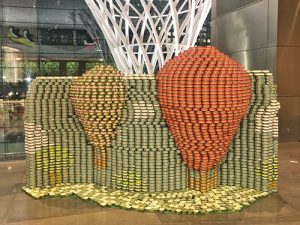 Entitled “Lifting Hunger Away,” the structure depicts two rising hot air balloons that cantilever nearly two feet above a slender base. The structure took DeSimone’s volunteers more than 5 hours to complete and is now on display on the second level of the Brookfield Place retail center. At the end of the exhibition, the canned foods will be donated to local hunger relief organizations.

To vote for DeSimone’s “Lifting Hunger Away” in this year’s People’s Choice Awards, click here. The project is listed as number 18 alongside competing submissions.

Canstruction is a not for profit charity which hosts competitions and events creating awe-inspiring, gigantic structures made entirely out of food. Teams of volunteers, which include design industry professionals, participate in Canstruction events in over 100 cities around the world each year. Afterwards, all food is donated to local food banks. Since 1992, Canstruction has raised nearly 82 million pounds of food for hunger relief organizations around the world with its signature, trademarked CanArt.