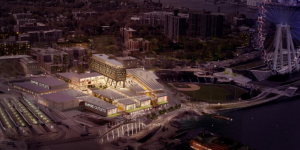 Construction on the nearby Ferris Wheel, which will be the largest observation wheel in the Western Hemisphere, will begin in a few months, the developers said.

Read the full story on the groundbreaking here.