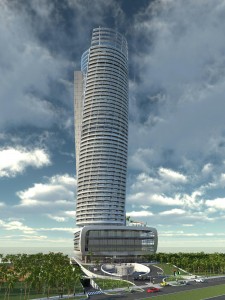 New York, March 29, 2014 – DeSimone Consulting Engineers was honored today by the 2014 ACEC (American Council of Engineering Companies) Engineering Excellence Awards with a Platinum Award for The Regent Emirates Pearl in the Structural Systems category. The Awards Reception and Gala was held at the Grand Ballroom at the Waldorf Astoria.

The Regent Emirates Pearl Hotel is a luxury development located on the Corniche across from the landmark Emirates Palace Hotel. In addition to ACEC’s platinum award, the Regent Emirates Pearl structural design has won several other awards including Outstanding Project of the Year (2012) by the National Council of Structural Engineers Associations and Award of Merit out of Country (2012) by the Concrete Industry Board.

The Pearl’s signature feature is the 45-story twisting elliptical floor plan, and columns which contains 60 luxury serviced apartments occupying levels 1 thru 10 and a 5-star hotel with 437 keys including presidential and royal suites occupying levels 11 thru Roof.

“The main structural challenge was to appropriately model, analyze and design the complicated twisting shape of the tower. The perimeter tower columns are inclined 7 degrees vertically and “shift” 48 centimeters (19 inches) each level in the circumferential direction, with a total of 21.60 meters (70.8 feet) from bottom to top. In plan, each floor rotates 0.56 degrees each level with a total of 25 degrees of total rotation from Level 1 to the Roof.” wrote Ahmed Osman, P.E., M.Eng, and Managing Principal with DeSimone Consulting Engineers, Abu Dhabi, UAE.

DeSimone wants to extend congratulations to the entire project team behind our Abu Dhabi project, the Regent Emirates Pearl Hotel. The Pearl won a Platinum Award for Engineering Excellence in the 2014 ACEC New York Awards Competition!

To see information on the 2014 ACEC awards follow this link: http://www.acecny.org/~aiwetace/components/com_rseventspro/assets/images/files/EEA%202014%20Final%20Program.pdf

DeSimone Consulting Engineers provides high-quality, creative structural engineering services to architects, owners, and developers. Founded in New York City in 1969, DeSimone has grown to have nine offices worldwide. Located in New York, Miami, San Francisco, New Haven, Las Vegas, Boston, Abu Dhabi, and Colombia, our offices are organized to support our clients around the globe. To date, we have designed projects throughout the United States and 18 countries.